I did not play with Barbies, I did not play dress-up, and I fought tooth and nail when my mom wanted me to put on a dress. I kept my nails short, I hated pink and threw a ball better than most of the other boys in school. I was very aware that I was a girl, I wasn’t trying to be a boy, but I was doing a good job acting like a boy. Internally I would compare myself to the other girls at school who exhibited much more feminine mannerisms than me and I hated being so boyish. But as much as I would try to be “girly” ultimately my failure in the pursuit of being someone that I am not, I felt like I stuck out like a sore thumb.

Fortunately, there was one thing being a tomboy that worked in my favor, though, and it was playing sports. As soon as I started to play sports, I knew I had found my place. I played every sport I could find. I never felt like a sore thumb in sports. Even though it was tough to be in the wake of my older brother who was the quarterback for the football team and the pitcher of the baseball team, I was determined to be another winner like him. 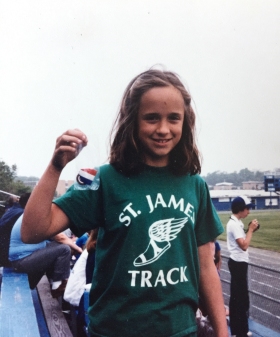 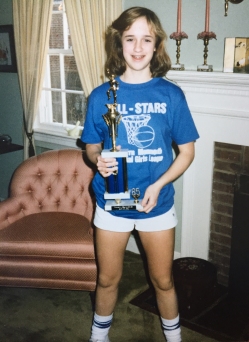 In fifth grade in my elementary school (the school that I attended was K-8) I tried out for the basketball team and the age group was 5th-8th graders. That year I was the only 5th grader that made the cut. I was floating on air! I was going to be playing with 8th graders? All of the hours playing in my backyard basketball court rather than playing Barbies finally paid off.

In the early 80s school sports was a little less complicated for both students and parents so I was able to play all of my sports without conflicts and my parents didn’t have to drive all over the state. Cross country and soccer in the fall, basketball in winter, track in the spring and softball in the spring/summer. Leaving the rest of my summer to relax at the beach club.

It was probably busy for my parents, but they never complained. My mother was always in the stands, rooting me on. As the years progressed, I got better and better at it, getting individual medals, and not participation medals, real medals. And as I got more and more medals, I became more and more competitive. By 7th grade, I was no longer content with just playing sports, I was playing to win. Sometimes games would bring out the beast in me and I knew that I wasn’t fun to be around at those times. I didn’t like myself either. One basketball game my team lost against the worst team in the league and I blew my lid. I took it personal. My ugly streak of competition sometimes took the fun out of the games.

By High School, I was no longer interested in track and cross country and soccer, and it was evident that the softball coach picked favorites. And I was not one of her favorites. She was picking girls that literally couldn’t even hit the ball correctly so I didn’t even want to pursue it. It seemed like a joke to me.

As for basketball I played two years in High School until some bad blood got in the middle of me and my coach, and I was told that I had a “bad attitude” about the team and the other players and the competition.

But playing sports is synonymous with competition so how do you cope with it?

In the end, I really didn’t want to quit but I didn’t know how to make amends with my coach and I didn’t know how to change my attitude so I decided to give the finger to it all. Besides, at the time, I wasn’t embracing my inner tomboy anymore so I went against the grain by putting on makeup and letting my nails grow because I was boy crazy and what boy likes a girl who acts like a boy??

So the end of sophomore year, by career in sports ended. With an anticlimactic thump.

I was thinking about all of this while watching a very long track meet yesterday at the High School. My son, who is a Freshman and hasn’t played sports his whole life, is on the track team this year. I have been asking him to play sports, one sport, any sport, forever, and so I was thrilled when he came up to me this year and told me that we was joining the track team. The other day, when dropping him and his friend off at practice, he asked me, “Mom, what was the sport you used to play again?”

I proudly responded, “I did a bunch! I played basketball, softball, track, soccer and cross country.”

He was less impressed by my list. Or maybe a 15 year old is never impressed by their parent doing anything. And maybe he’s just not taking it so personally like his mom. At his last event at the meet last night he placed last in the 800m. I knew he was racing against a lot of other more experienced runners, but still I felt bad for him when he ran through the finish line.

Later, when mentioning his placing in the race, he chuckled and said, “Yeah so I got, like, last place. Oh well. Everyone in the race was really good.”

He chuckled? I thought, wow, if I were his age I would have been mortified. Maybe competition is just not racing through his blood like it was for me.

I always look back at sports with a little bit of a cringe. I’m so proud of some of my accomplishments and then at the same time really embarrassed by some stupid actions. But who isn’t embarrassed by at least something in their youth? These days in my calmer self my blood is not racing with competition anymore, but it never completely left. I’m okay with keeping the competition streak a little because it has helped me to land jobs, but more importantly, it showed me how to compete against myself to be a better person and to never forfeit and to always stay in the race.

Welcome! This site includes my photography and my essays. It also includes information about my current and past exhibitions. I currently live and work around Columbus, Ohio.