Disclaimer – I’m not a trained chef. In fact, I could hardly boil water until about 6 years ago. I’m also not a nutritionist. I’m just a mom messing around with some recipes. But I wanted to share this story and this delectable recipe in case you’re looking for options from the original Irish Shepherd’s Pie for the weekend.

A couple of years ago, my husband got the bad news from his doctor that his blood sugar was high, so high that he was officially diagnosed with Type 2 diabetes. Diabetes runs in his family, but clearly the weekend beers over the last 20 years probably caught up to him. He was put on medication and encouraged to lose weight and exercise. It was a real blow for him. One of those moments in the doctor’s office that we all eventually realize that we are really in our 40s. If you are in your 40s and you haven’t gotten your own crushing blow yet, you will. Enjoy yourself for now, put your feet up and sip on that beer and chew on that Dorito because one of these days your doctor is going to tell you something that you don’t like. Sorry.

So as we digest the information about Type 2 diabetes, right away I think, what am I going to cook for him? A lot of our dinners involve pasta or bread or white potatoes, which is a real no-no for diabetics. I was pretty clueless about blood sugar and had no idea about the sugar effect of carbohydrates. For anymore that doesn’t, it means that the bagel you had for breakfast had just as much sugar as a can of Coke. Considering that I used to eat a bagel for breakfast everyday for about 20 years, I’m surprised that I’m not Type 2 diabetic, myself. The reason that this happens is because carbohydrates are broken down into sugars in your body. More confirmation that everything I love is bad for me.

So why was this low carb, low sugar diet complicated in our house? Because between my husband and I, we have 4 boys, 3 of them are teenagers. Does anybody know how much food a growing teenager boy eats? A LOT. Because meat can get expensive to feed a house full of carnivores, giving them a plate of chicken and broccoli would not fill them up, so giving them pasta, bread or white potatoes was an easy accompaniment. My cookbook is chock full of penne-chicken-vegetable-cream sauce kind of recipes so it would require me to take out the pasta out of the meal before giving my husband his dinner. How long do you think I kept doing that? A day.

Call me old-fashioned but I do believe that it would be unfair for him to cook his own dinner after work. I know a lot of single people do that, and I know there’s lots of wives out there that don’t cook, too, but I do cook and I don’t mind doing it. I’m just not a big fan of cooking two dinners in one night. I’m not looking for experience on being a short order cook. Admittedly, there are still some nights that I just omit the pasta for him or give him an Atkins meal, but after looking through some diabetic cookbooks I found some great recipes. And there is one that is my favorite, Turkey and Sweet Potato Shepherd’s Pie, that doesn’t require me to cook it at the same time that I’m cooking the regular meal for the boys. The picky boys don’t really like this recipe anyway so I cook it ahead and keep it in the fridge for lunches and dinners.

Some original ingredients in Shepherd’s pie are minced lamb or beef and mashed potatoes. I’m sure an original Shepherd’s Pie is delectable, but there’s white potatoes and a lot of fat from the meat. Personally, I try to avoid beef and only eat it about 4-5 times a year because of environmental reasons. So if you are looking to reduce some of those and not go completely vegetarian, this recipe is why I think this is the BEST Shepherd’s Pie. 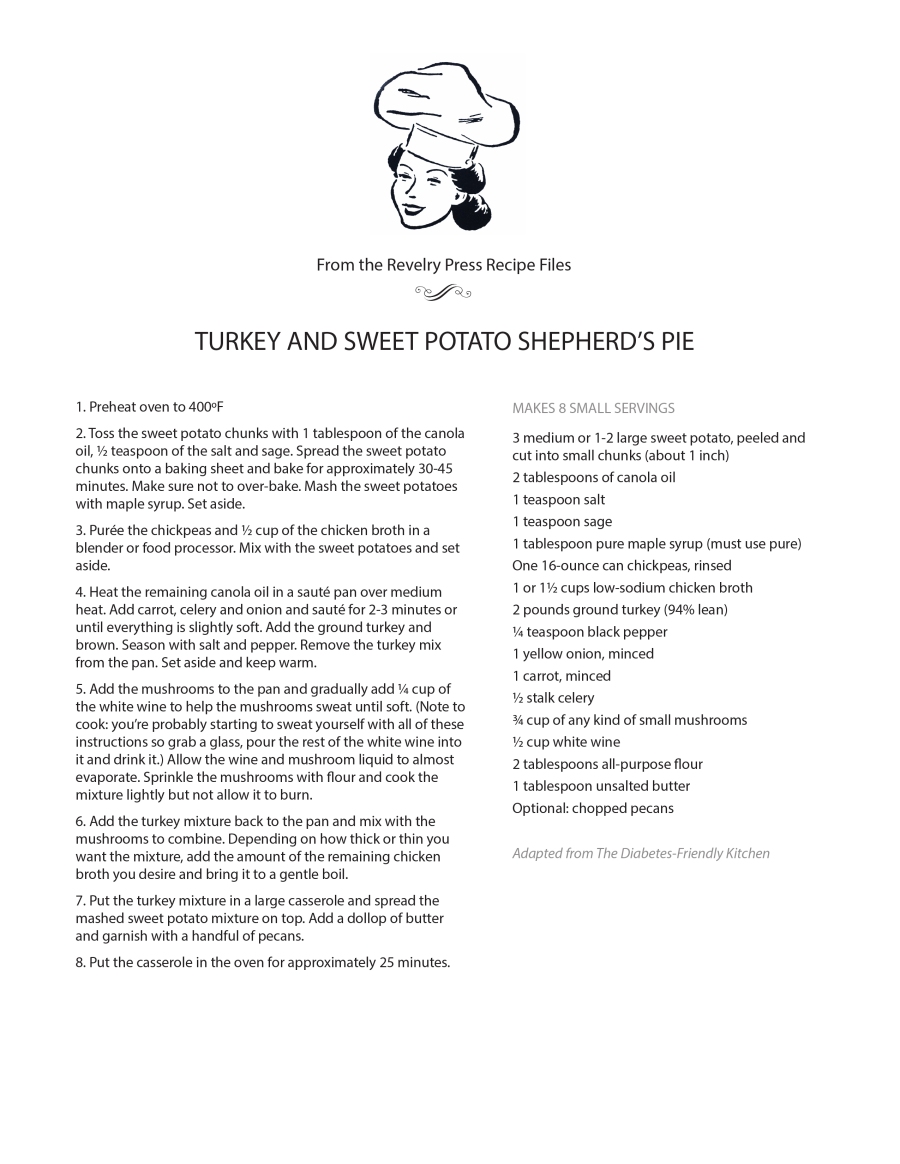 Welcome! This site includes my photography and my essays. It also includes information about my current and past exhibitions. I currently live and work around Columbus, Ohio.